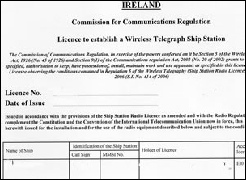 The information given here is offered in good faith and believed to be correct at the time of writing but please check anything important with the relevant authority(s) as rules and regulations are always subject to change.

AUTHORITY TO OPERATE GRANTED BY THE MINISTER FOR TRANSPORT, TOURISM AND SPORT

The holder of this certificate is hereby authorised to perform the duties appropriate to the holder of a Radio Operator’s Short Range Certificate of Competency on a ship in which a radio station has been established under a licence issued by the Minister for Transport, Tourism and Sport.

For the Minister for Transport, Tourism  and Sport

The authority shall remain valid until further notice.

the Minister for Transport, Tourism and Sport may at any time suspend this Authority to Operate with a view to revocation thereof, if it appears to the Minister that there are sufficient grounds to do so.

* What does VHF stand for?

* What is a VHF transceiver?

A VHF radio that can both transmit and receive.

* Are they difficult to use?

* Is any technical or electronic knowledge needed?

* What is the range of a VHF transceiver?

Best described as Line-of-Sight. The higher the transmitting and receiving aerials the greater the range.  As an approximation you could expect a couple of miles between small handheld VHF radios up to perhaps 50 miles or so from a Coast Guard radio station to a yacht with a mast top aerial.

* What is the GMDSS?

Global Maritime Distress and Safety Systems. Introduced by the International Maritime Organisation it defines internationally agreed compulsory safety systems, safety communication protocols, safety equipment and so on that all vessels over 300 tonnes, fishing vessels and passenger craft must comply with depending on their area of operation.

Although most leisure craft do not have to comply with GMDSS requirements they are strongly advised to fit VHF DSC if possible.

Digital Selective Calling. DSC is a VHF text only digital paging system somewhat similar to texting with a mobile phone only much easier to use.

* What is the difference between an A class DSC and a D class DSC?

Its purpose is to alert

a) every DSC receiver in range, or

b) a specific individual DSC receiver, or

to expect a voice communication.

DSC enables a vessel in Distress to alert all DSC equipped radios within range at the push of a button.

All modern fixed VHF transceivers sold within Europe must have DSC. A small, but increasing, number of handhelds with DSC are available as well.

* Are there handheld VHF radios with DSC?

Yes, Ireland will allow the use of regulation compliant transportable VHF DSC transceivers. The UK will issue a transportable licence for some DSC/VHF transportables but this licence is valid only for use in UK territorial waters (12 miles offshore).  It is not illegal for shops to sell CE marked handheld VHF/DSC radios but it may well be illegal to use one. A transportable VHF DSC will require entry of a valid MMSI in order to access the DSC functions; check with your licensing authority before buying.

No, not for a leisure craft in private use. However DSC offers many advantages quite apart from the Distress function so it is worthwhile considering up-dating to a DSC set.

* Can I buy a marine VHF/DSC set over the Internet?

Yes, of course.  BUT make sure it is CE marked and carries a Declaration of Conformity to the Radio and Telecommunications Terminal Equipment Directive (RTTE) for radio and telecommunications equipment sold in Europe. VHF transceivers bought from outside the EU, from the US for example, are unlikely to comply, may have different channel configurations, and may be subject to confiscation (and VAT and Duty on import). Sets intended for the UK and Ireland should also have channel M1 and M2 (often called channel 37).

* What is an MMSI number?

Maritime Mobile Service Indicator. A unique DSC identity consisting of 9 digits, 3 of which will indicate the country that issued the MMSI. For example an Irish vessel will have an MMSI beginning with 250 followed by 6 more numbers, i.e. 250xxxxxx. No other vessel in the world will have that MMSI. In a way its rather like a mobile phone number with, for example, 086 indicating the service provider and the following digits identifying the specific individual. The MMSI is used to identify the boat or station transmitting a DSC call.

Only if you have a VHF/DSC transceiver; the DSC functions won’t work without it.

Apply to the authority who issued the boat’s radio licence.

* What are the legal requirements?

A VHF radio can only be operated by someone who holds a Certificate of Competence or under the control of someone who has the certificate.

* How do I get a Certificate of Competence?

Do a course and exam with Sea~Craft !

* What is ‘Authority to Operate?

* What else is legally required?

Any vessel, irrespective of size, with a radio transmitter on board (hand held or fixed) must have a Ship Station Licence which must be kept on the vessel.

* How do I get a ship Station licence?

In Ireland from the Maritime Radio Affairs Unit (MRAU) at the Department of Transport, in the UK from Ofcom. Both have application forms available as downloads.

* How much does a Licence cost and does it have to be renewed?

A new Irish Ship Station licence costs €100, a transfer costs €30. A UK licence is free; both last for the lifetime of the vessel.

* What should be included on the Ship Station licence?

Anything carried on-board that transmits a radio signal such as a handheld VHF, radar, EPIRB, SART, AIS, RTE and so on should be included. There is no extra charge for these inclusions.

* Can I get a licence for my hand held VHF?

No ,as it is the boat that has the licence not the radio. However Ireland will issue a Ship Station Licence, call sign and MMSI to a vessel based on the carriage of an approved hand held VHF with DSC. The UK does issue a ‘Ship Portable Radio Licence’ but this is valid for UK waters only.

Search and Rescue Transponder. Sends a unique signal to radar within range to aid location.

Automatic Identification System. A system used by ships, leisure craft and by vessel traffic services to automatically transmit specific details of the vessel such as MMSI, name, type, speed, heading and so on. The information is transmitted on a VHF frequency and displayed on a dedicated monitor or on a compatible chart plotter. Some VHF radios also display AIS information

Radar Target Enhancer. A small electronic device that sends an enhanced echo back to interrogating radar. Its purpose is to increase the chance of being seen by radar.

Automatic Transmitter Identification Scheme, an automated identification system which is mandatory on many inland waterways of continental Europe. An ATIS enabled VHF radio automatically transmits the user’s unique call sign at the end of each transmission thus identifying the transmitting station. ATIS is required on the inland waterways of the ‘RAINWAT’ signatories:

Austria, Belgium, Bulgaria, Croatia, Czech Republic, France, Germany, Hungary, Luxemburg, Moldova, The Netherlands, Poland, Romania, Slovakia, Switzerland, Serbia and Montenegro. Some makes of VHF radios can be programmed with an ATIS identification code but ATIS must not be used in Irish and UK territorial waters. ATIS and DSC are not compatible and DSC must not be used where ATIS is required.

* What does MRAU stand for?

Maritime Radio Affairs Unit. The unit within the Irish Department of Transport that deals with radio certificates, examinations and radio licences amongst other things.

* What are the different levels of radio certificates of competency?

* Where does Sea~Craft run courses and exams?

We are based on the east coast but are very happy to run a course for your club or organisation anywhere by arrangement. Give us a call at 01 286 3362, anytime.